Invisible technologies are a part of our lives even if we are not aware of them. The rise of invisible networks had such an impact that it changed our manner of communicating, working, learning and playing. Many of our daily experiences are shaped by invisible structures based on technologies employing electromagnetic fields, radio waves and wireless networks. Whether it is computers, television networks or mobile communication instruments, many of the tools we take for granted have an invisible body that we do not consciously interact with or even think about because it is invisible for the human eye. But when technologies disappear from sight, they also disappear from our consciousness, and although we are surrounded by a whole world of invisible structures, we no longer experience our environment as constructed. We interact with invisible technology in every realm of daily life, be it through mobile phones, the TV set, radios or even electronic kitchen appliances, without actually thinking about them or knowing about their functionalities. The interest in objects is therefore shifting from the technology itself to the value they have for shaping our experience: we are no longer interested in the way a tool works but in what social or cultural status it signifies. As a result, we become increasingly removed from the technology and its influence on our daily lives, actions and thoughts. To break the cycle, the exhibition (in)visible sounds goes in search of invisible networks that exist around us. Artists visualize those unperceived yet very present technologies. Some literally expose both analogue and digital networks, while others make use of exactly the invisible, surprising us with the amount of information passed on and possibilities opened up by invisible networks.

by Annet Dekker and Malka Jonas

The omnipresence of computers and mobile communications apparatus has led to digital technology increasingly becoming a part of our environment. Invisible wireless networks have altered our ways of communicating, working, learning and playing. They have even taken on an important role in the creation of our identity and our relationships with others. In the course of this development, interest in the apparatus has increasingly shifted from the technology itself to the role it plays in shaping our experience. The artists in this exhibition investigate the invisible world of sound waves and frequencies and electromagnetic fields. In all cases they touch on issues concerning the radiation that is ever-present, but imperceptible to our senses. They make use of technologies that are present around us, but invisible, and by playing with electromagnetic waves and different frequencies their works surprise us with an abundance of information and possibilities. 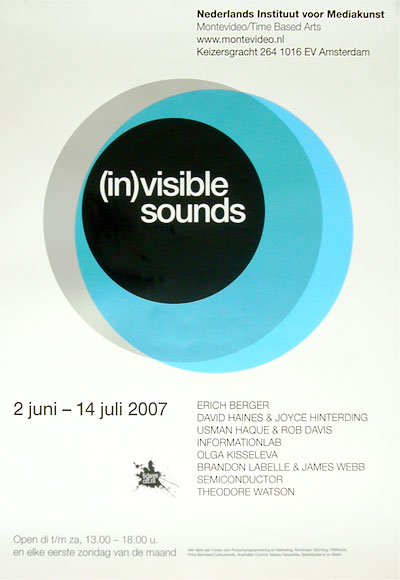